CASE STUDY: How Yepme marketed itself to create a massive 6.8 million fan following over Facebook? 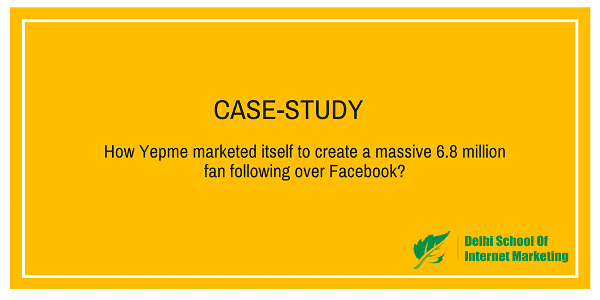 Three IIT and IIM graduates, Vivek Gaur, Sandeep Sharma and Anand Jadhav launched Yepme, a portal to sell fashion apparels in August, 2011. It was an implication of incredible advertising system and marketing strategy that Yepme targeted their customers from the tier II and tier III cities rather than those from the metro one.

The founders knew that the rural India was lacking in the big brand stores and popular fashion names. So they did their marketing in such a way so as to target most of the areas from tier 2 and tier 3 cities along with rural India. With the empty space in the business sector for private label design wear, Yepme.com possessed the space firmly and it has now set as a brand name in online fashion industry across India with approx. 7 million fans on Facebook and around 7500 followers on Twitter.

Initially, the brand started only with men’s apparel but soon the company understood the need of private label fashion apparels in the women sector and soon started to deal with women’s apparel too. Later in 2014, Yepme expanded to overseas in the year 2014. To target the customers from overseas, Yepme created “Yepmeworld”. The company serves in more than 1000 cities in India and delivers more than 5,00,000 units in a month.

Yepme exactly knew where their target audiences were from. They hugely targeted the customers from tier I and II tier cities rather than focusing on the metro cities.

Yepme raised funds times to times that helped the brand to grow as anything. Soon after its launch, the company raised $8 million in the year 2011-12. Soon after the first round the same investor again invested $12 million to grow the brand. Most recently the brand has got a massive $75 million in Sep 2015 that is still helping the brand to grow its customer base and increase its inventory.

Tie-ups with other e-commerce portals

According to IAMAI report, “The e-commerce market in India is expected to cross 2 lakh crore in this year”. Along with selling its products on Yepme.com, the brand sells its products over Flipkart and Snapdeal as well.

According to a study, more than 70% of the Yepme followers use their smart phone to access the Facebook page. 60% of the customers who reach to Yepme via Facebook and complete a transaction are using mobile phones.

In the year 2012, Yepme endorsed Kangana Ranaut as its style ambassador. Then the brand moved with Farhan Akhtar, Sonu Sood and Esha Gupta. Now the most popular Bollywood actor Shahrukh Khan is endorsing the brand since December 2014.