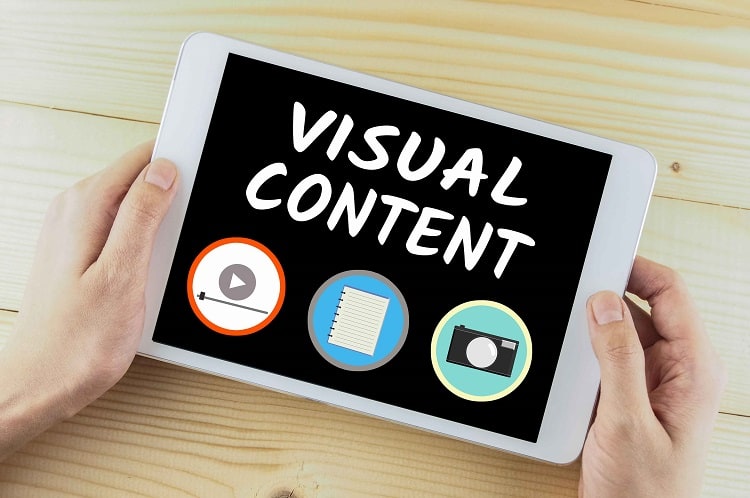 Don’t get me wrong!

Words still play an integral part in how we pass messages along. But researchers have realized that our attention span is shrinking by the day.

According to the research, our attention span has dropped from 12 seconds to 8. And there’s no telling how bad it will get as time advances.

This means one thing:

Marketers will find it more difficult to grab prospects’ attention with mere words.

Fortunately, there’s a better way to grab these prospects’ attention, long enough to convert them into customers, and that’s with the use of visual content.

The deal is that people retain information that comes in visual forms a lot faster than words.

You don’t have to take my word for it.

According to Mcknight Kurland, the human brain can register as many as 36,000 visual messages per hour, and process them 60,000 times faster than text. 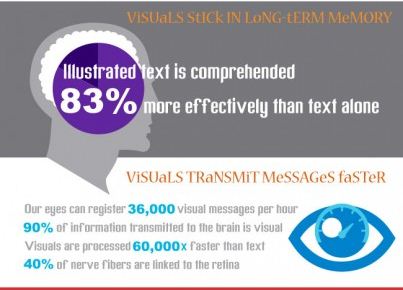 The difference is very clear:

So the smart thing for you to do as a marketer will be to enrich your blogs and resources with images and other visual aids.

But too many marketers are not doing that.

In fact, statistics show that only 29% of marketers are spending more than 5 hours a week creating visuals. 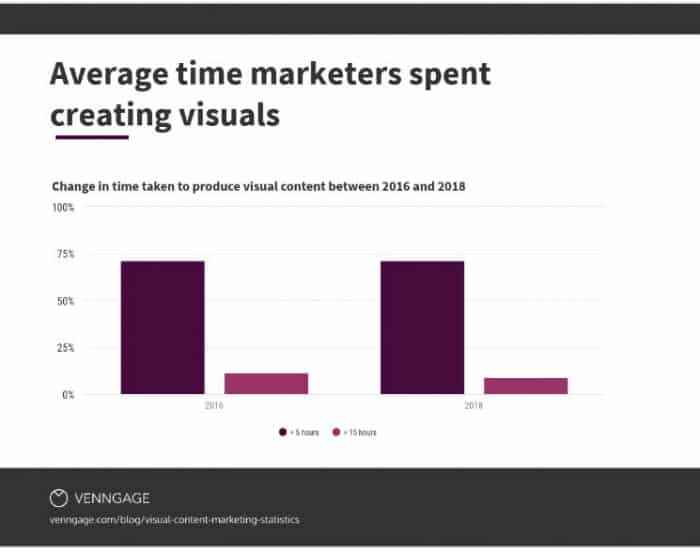 If you are not yet harnessing the potential of visual content in your marketing strategy, then you will likely be left behind. 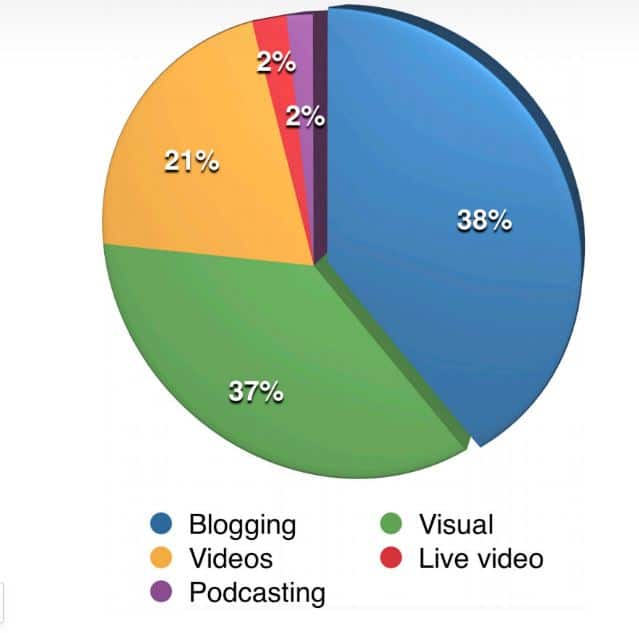 So marketers must have realized that visual content has an important role to play in their content development, especially since it had been so successful in social media marketing. 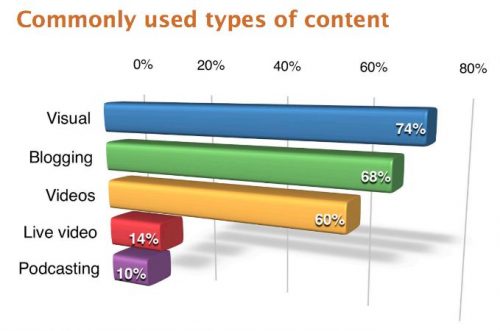 Now, one thing has been established:

Visual content is the future, and it is integral to marketing as we know it.

But why should you invest more in it, and just how much impact will it have on your marketing results?

Let’s take a dive into its capabilities, using some case studies.

As a business, figuring out how to engage your customers should be one of your topmost priorities.

Remember that visual content leaves an imposing image in the human brain, so why not use it to your advantage?

If you follow any popular blogs, you will notice that one thing they have going for them is the number of likes and shares that their content garners whenever they go live.

Well, you are not the only one that notices.

And some big marketers already know this, which is why they develop inspiring memes that their audience can share.

Take Hubspot for example, they created a sales and marketing version of the popular ‘What People Think I Do/What I Really Do’ meme. 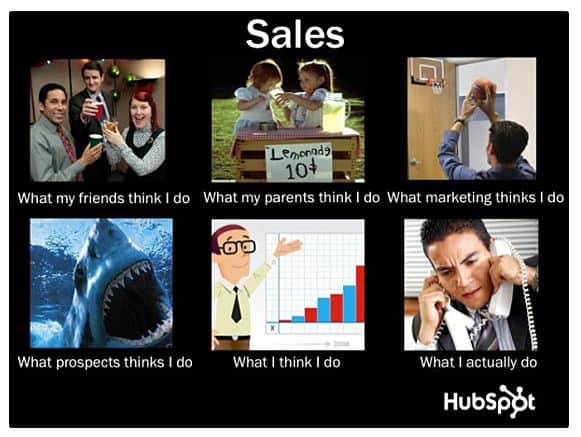 And social media is one of the most suitable places to engage with customers and prospects.

In fact, according to HubSpot, Facebook photos generate higher engagement than the average posts. 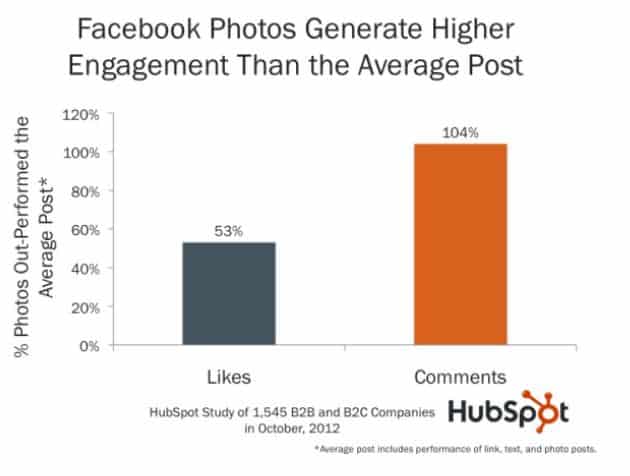 Infographics are a powerful way to generate high-quality backlinks.

According to Neil Patel, you can generate up to 5,000 visitors to your web site per week, using infographics alone.

Another statistic from Unbounce claims that the search volume for infographics increased by over 800%, in only two years.

Neil tested this theory on one of his businesses, KISSmetrics, and they generated 41,142 new backlinks from over 3500 unique domains, in addition to over 2.5 million new visitors.

And it was no fluke either.

He has continued to create infographics for his other businesses, and they generate thousands of backlinks from different websites around the world.

3. Videos are capable of generating millions of views

Do you know that mobile video viewing has increased by nearly 10 million viewing minutes?

Gregory Ciotti found that out when he joined AsapSCIENCE in 2013.

He discovered that not only are videos capable of generating millions of views, they are also crucial to pulling high volume traffic and building great backlinks.

And, one thing that makes video content perhaps the most formidable popular form of content, is that it combines visuals, sound, and text.

It has grown from being a video Stackhouse to becoming the second largest search engine in the world. 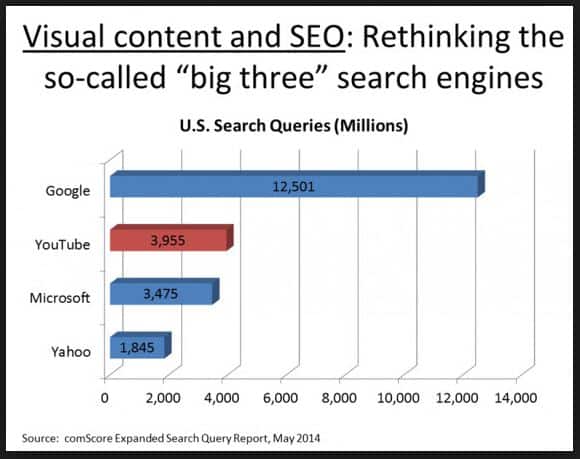 It makes a ton of sense.

Since we are agreed that humans have a short attention span and that visuals make better impressions than words, then what can make for a more exhilarating experience than videos, which is a combination of at least three content formats?

Visitors are usually guilty of endless scrolling on web pages.

Adding eye-catching banner ads to your content is capable of stopping them long enough to pause to give your content a chance.

While banners may not be as effective as it was in the early days of the internet, it still works.

Take the example of the Dutch mail order company, Bakker-Hillegom.

The company people spent a considerable amount of time on their site but weren’t converting as they should have.

So they designed various banner ads and placed them in several places within their site.

In 12 days, the banner ads generated an average of 100% increased visits to their site.

5. You can drive traffic from SlideShare

Smart marketers have found out that SlideShare is a hotspot for pulling visitors to their sites. 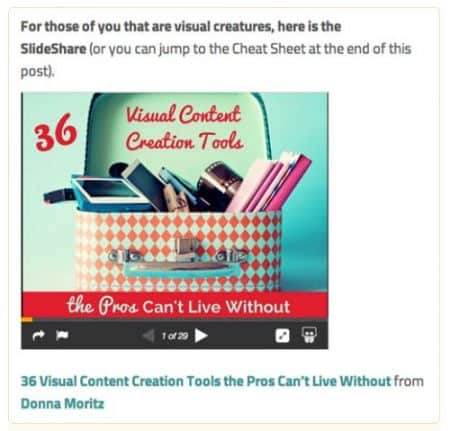 In less than a few weeks, it had attracted more than 100,000 views on Slideshare and had been shared at least 4500 times on social media.

According to her, that singular move attracted more than 600 new subscribers to her blog.

This is because it’s easy to connect with people and sell things using Instagram’s visual layout. This is absent elsewhere.

The impact visual content will have on your business

The bottom line is that visual content success is not exclusive to some businesses.

One thing about visual content is that it is bound to impact your business anyhow, whether it’s in increasing conversion, generating traffic, or both.

Here’s what to expect:

The number one thing you should aim for as a business is to improve user engagement, and that’s one major dividend visual content accrues you.

No one truly liked being in grad school because it had so many words, so they will shy away from your site if it reminds them of grad school.

It’s a clear concept; when people think about your brand, they think in visuals.

For one, visual content will take you places on social media, and that’s where the crowd lies.

The logic is that more people prefer the variety of colors that visuals provide, to the black and white walls of text.

Using visuals to tell stories is at least a thousand times better than telling them in words, no matter how creative you are.

And, of course, it goes without saying that you still need to introduce a level of creativity in your visual presentations if you must stand out from the herd.

If you invest more in visual assets, whether Infographics, videos, images, SlideShare, memes, etc., you are more likely to reach your business milestones sooner than if you do not.

Tulip Turner is a Content and Inbound Marketing expert at Snewscms. Over the years, she has helped dozens of businesses in defining their content strategy. She believes that creativity doesn’t inspire customers anymore. A true story when recited well is enough to build a connect.