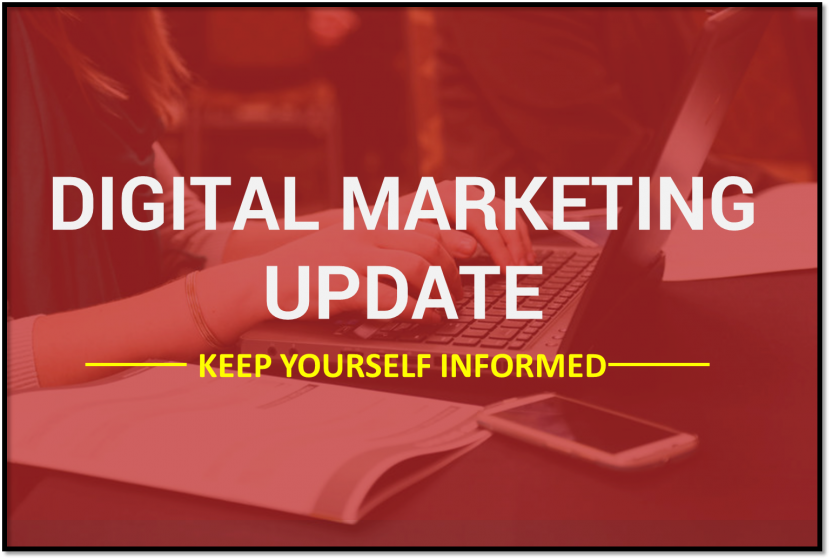 The month of April has seen a number of updates into the digital domain.

DSIM has done the hard work of tracking, researching and measuring the marketing suggestions of the most important digital updates so far this month from the major platforms that digital marketers use to promote their business.

Here’s our recap of this month’s digital updates what happened in online marketing today, as reported on DSIM and other places across the web.

1) Google Chrome to Prevent Videos with Sound from Auto playing

Google’s most recent version of Chrome for desktop will disable most videos with sound from playing automatically.

So, now users won’t be barraged with undesirable sound from videos when browsing Chrome.

However, there have been kept special cases for videos that Google sees the individual user is interested in; determined by three factors:

Google has confirmed rolling out another broad core algorithm update this week. The search engine giant has released a similar algorithm update early last month and now, it has announced the confirmation on Twitter.

Outstream video ads play automatically on mute when they appear on screen. A user can then tap the ad to unmute and restart the video from the beginning, or keep scrolling.

Google AdWords launches Reach Planner, a new planning tool for video campaigns. It allows advertisers to forecast the reach and frequency of video campaigns on YouTube and across Google’s video partners, in over 50 countries.

The tool will provide unique reach data across all devices, for all core audiences and video formats.

Google offers a number of products for businesses to use them for managing different tasks. One of them is Google My Business.

It has expanded a feature introduced earlier this year, enabling restaurants to add food and drink menus to their GMB listings.

Google has updated its guidelines for publishing job openings that have been marked up with job posting structured data. Failure to adhere to these guidelines could result in a manual action.

Google emphasizes that these guidelines are being put in place to ensure an optimal job seeking experience for Google Search users.

Google has officially launched its “More results” search button on mobile, making it possible for additional search results to load beyond the first set of results displayed.

The announcement, made via a tweet from the Google’s @SearchLiason account, confirmed that the new “More results” button will replace the previous “Next” button that would display a new page of mobile search results.

After its launch in June 2017 for publishers in North America, the UK, Germany, Australia and New Zealand, Google’s Funding Choices ad messaging is now expanding to 31 more countries.

The Funding Choices platform lets publishers display one of the following three messages to site visitors using an ad blocker:

Google has added a new feature to Search Console that will allow site owners to filter performance reports by ‘Search Appearance.’

Search Appearance refers to the various ways a search result can be displayed according to how the content is marked up. This includes:

This appears to be the expansion of a feature introduced last December when Google added a similar carousel with answers from Stack Overflow.

New kind of #RichSnippet for #Quora answer. I have seen this for “best water purifiers india” query. Who else have observed this new #Google test? @rustybrick @neilpatel @kapilchadha #SEO #search #SearchEngineOptimization pic.twitter.com/3JLuK4Bmwl

Bing Ads has announced the rollout of a new feature that will allow users to add price extensions to search ads.

Price extensions allow advertisers to display products and services with their respective prices and add up to the 25-character description with each extension.

One price extension is visible from the ad, and a ‘view more items’ drop-down displays three additional listings.

Bing Ads advertisers will soon be able to create product ads with up to 11 images — 1 main image plus 10 additional images.

In order to take advantage of this update, advertisers will first have to upload additional images in their product offer feeds.

13) Facebook Gets Instagram’s ‘Boomerang,’ and an AR Drawing Tool

Facebook in a wake of leveling up its stories feature has brought some improvements, an augmented reality (AR) drawing tool and Instagram’s popular Boomerang feature in its mobile app.

Using the 3D drawing feature, users now can make doodles on the screen and combine the drawings with the real world. Users can draw scribbles before or during recording and then, move the camera around to see the markings stay in place.

Facebook ad is one of the effective social marketing techniques to gather leads. But, to procure and produce completely engaging and high performing ad content, you need to do A/B testing.

Facebook has now come up with an easy method for split testing ads aka A/B testing.

The split testing ad service by Facebook has been available since last October, when it started allowing advertisers to compare ad formats, CTAs, and other marketing programs.

Facebook has always been a magnificent social platform for users. With several features provided, the social platform has enabled them to utilize in specific ways. Video and image sharing are two of those prominent features.

Facebook in its latest update has come up with a service in which users can now send and receive HD videos and 360-degree photos. These updates on Messenger are accessible globally on Android and iOS, both.

Facebook announced earlier this month that as part of its efforts to make political ads more transparent, it has now added an Authorization tab in Page settings for advertisers wanting to run political ads.

To help advertisers reach more of their audience on YouTube with even more flexibility.

YouTube has introduced a new way called “TrueView for reach.”

TrueView ads are bumper ads which, despite being YouTube’s shortest ad type, are also skippable.

LinkedIn has teamed up with Google-owned company, Tenor, to integrate GIFs into direct messaging.

Google utilizes Tenor to power its GIF search, which is also what it will be doing for LinkedIn. Tenor will allow LinkedIn users to search for GIFs within messaging and send them to others immediately.

Instagram now has a tool that will let users download a copy of everything they’ve shared to the network.

The tool, which can be accessed here, is currently only able to be used on desktop browsers. Access via iOS and Android will be available in the future.

The email will contain a link to a file with the following information:

Instagram is reportedly in the process of rolling out a new feature which is similar to Snapchat’s QR codes.

The new “Nametags” will make it easier to follow people on Instagram that you meet in real life, and easier for them to follow you back.

Implementing several changes to the appearance of business profiles, Pinterest starts displaying of total monthly viewers for its Business Profiles.

Now, everyone will be able to see this statistic, which was earlier shown to account administrators.

Users can see the total number of people who saw their business’s pins within the last 30 days. The changes are likely to roll out over the next couple of months.

Snapchat is giving advertisers the ability to sell products with custom augmented reality (AR) lenses, which users can add to selfie photos and videos.

When Snapchat users add shoppable AR lenses to their photos and videos, a button will appear that can lead to either an app install page, a product page or a URL of the advertiser’s choice.